A puzzle game where you solve the encoding machine ciphers.

The key features are:

This game is a Game Off 2022 game jam submission.

The game jam theme is cliche. Therefore, you're hacking a Hexagon using some retro-style hacking device with bright green consoles.

Estimated game play time: 2-5 hours, depending on whether you're willing to clear the bonus content or not.

Note: this game performs better in Chrome than in Firefox. Also, you can't run custom levels in browser, use download a game executable for that.

The in-game manual could be enough for some players, but it leaves a few aspects undefined on purpose. If you don't want to fill the gaps on your own, here is a short overview about how this game is intended to be played. In a sense, it is a spoiler.

Every level (called component) consists of some encoding machine. It turns the text input into some encoded output. For instance, you run it with "hello" and get "ohell" as an output.

To clear a level, you need to decipher the access keywords (encoded keywords). You do that by typing the non-encoded (original) keyword into the input text field.

How would you know what to type in there? This is an actual gameplay: you need to figure it out on your own. You have an encoder simulation device at your disposal. It can encode any input using the same algorithm that was used to encode the keywords. The encoded keywords are listed in the right section of the interface. You can try to backtrack their transformations individually.

The text input is controlled as you would expect it: type some letters in, remove text with backspace, move the text cursor with arrows. Enter runs the simulation with the current input value. Space pauses the simulation. Tab toggles between the normal and terminal modes. Escape always works as a "go back" button.

You unlock new terminal features with your game progress.

The progress is saved automatically.

The custom levels feature is only available in the desktop builds of the game (i.e. not in browser).

There is no "credits" screen anywhere in the game, please see CREDITS file for license-related information. Game source repository can be found at github.com/quasilyte/decipherism-game.

Loved this game! Took a couple hours, but I finally fully completed it. My only complaint was that some of the transformations and their iconography are not explained anywhere. I had to actually go into the source code to figure out what the three dots was referring to, for example. Thanks for the fun!

Thank you for playing the game! I wasn’t expecting many people to score 100% completion. :D

The three dots thing is there to keep some things cryptic on purpose, so there is some exploration and experimentation left for the player. It’s usually possible to finish most of the levels without a full understanding but the combined puzzles (the ones that unlock the bonus levels) require ~full understanding of everything. This is a bonus (optional) content, so I felt that it was fair to keep it challenging. :)

This is pretty cool! Though, the "fnv_even" branches are... annoying. The manual itself says it can't reasonably be predicted, so it's hard to treat it as anything other than a deterministic RNG call.

Cool game, great concept. Was fun to figure out the puzzle. I definitely got a little confused more than a couple of times. Love the graphics (especially the notebook stuff for instructions), and sounds are great too. Played as part of the GitHub Game Off live stream:https://www.twitch.tv/videos/1712660556
Congrats on top ranked too :)

Sorry for the confusion during the gameplay. I’m not good at creating player-friendly introductions into the game.

For instance, there should be a popup message about what’s going on when “output” looks like “encoded keyword” but it’s not registered as a correct answer. It’s an encoding collision. Different inputs sometimes may encode identically. But the player is trying to find a “keyword”, not the encoded keyword output, so it’s always a real word like snowball instead of some gibberish. There is a manual page for output collisions, which appears after completing a level while hitting a collision at least once (the game gives a sound cue that it’s a collision).

This is probably the thing I need to fix: make game more easy to understand. As some other people said, it needs an interactive tutorial.

Thank you for playing!

on the first part of the second level, i have an input that gave the correct output but was wrong. it used the second road instead of the first one.

(Spoiler alert for other readers)

The “unchanged” condition compares the current text value against the text input. If they’re equal, it’s considered to be unchanged. So if we start with “abc” and rotate it twice, it’ll go through abc->cba->abc, the unchanged condition would be “true”. Otherwise it would be false.

I wonder if “input_unchanged” name instead of “unchanged” would make it more self-explanatory.

This game is incredibly interesting and unique! I love how creative the puzzles (as far as I've seen) are, and the aesthetic looks really nice!

Also, really thankful for the alphabet guide, especially the dots (and the notes about ciphers). So glad it's there and I didn't have to google it.

Still stuck on finding the secret word on 4 though, is there another solution for this? Sorry and thanks for making this game!

Also, you may want to use a terminal “value inspector” feature and see how the input changes over the encoding steps (use “tab” key to toggle a terminal mode). Take a closer look to that rot13 transformation.

Keep in mind that it’s a bonus content, I never expected every player go for the compound encoded keywords. :) But it looks like you’re doing great!

If you managed to complete a level and it was removed (or renamed) from the next build, you might get a situation like this:

I’m not even sure I want to fix it. It’s hilarious. 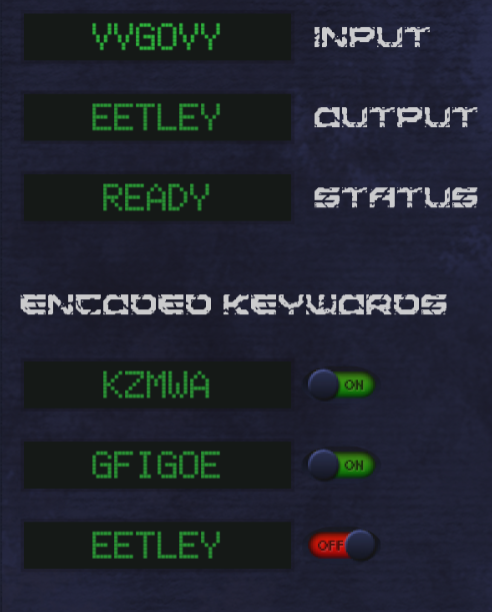 Oh, congrats. If you will beat the level, you will unlock an extra manual page about the encoding collisions. :)

“Multiple solutions” as in you can find a solution using different ways. You don’t always have to do a backtracking, for instance. :)

Yeah, I saw that. 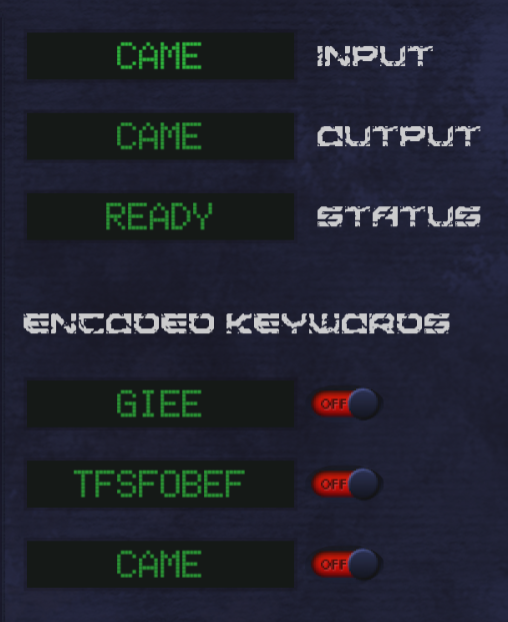 Look what we have here.

I would say that it’s an unfortunate misfeature. I may try to eliminate most of these ambiguously encoded words from the keyword lists. I don’t have an automation for that right now and no extra spare time. :( I’ll keep in mind that this issue could be bothersome for the players!

I am unable to add anything to the INPUT box. I can only erase items.

Was it a keyboard layout issue? Only English layout is supported right now.

Apparently, it's caused by Caps Lock.

Well done dev on this game. This was the perfect game for me and I am so happy I came across it. It took me way too long to get through it all, but I stuck through it and got the 100%.

I honestly think this can be a great steam game! My recommendations would be to add simple tutorials for new components to the board and a definition page to the notes, as I was quickly stuck on some of the branch abbreviations, and not sure what they wanted me to do.

I had some weird stuff happening with the saving of some levels, but I assume this relates to browser-based saving.

I can actually see this game expand into a full-on game with a campaign, backstory, lore, and many more levels.

I hope that you will take this gem and expand on it as I really enjoyed the experience to the point I was losing sleep thinking of how to beat a level.

Well done once again on a brilliant game!

I added a manual page explaining the abbreviations. :) I think it fits the game well.

Previously I used the phrases like “chars” in the manual a lot, but then changed it to “characters” and “letters” that are more player-friendly. Maybe I could have kept the programming jargon in there while providing a separate vocab note page. :) Writing is not my strongest side though as you might have guessed by this point. :)

This game is, and I don't say this lightly, amazeballs.

First of all, I adore the aesthetic, both the green-on-black old-school monitor look, but also (and especially) the handwritten-on-graph-paper with doodles on the side look of the help/notes.  (OMG the American Chopper meme.  Perfect.)

Second, it's just not like anything I've seen before.  It's codebreaking but it's not just a mechanical "and now go look up the pigpen cipher" kind of thing, it's clever and non-trivial and yay.

I'm about halfway through at this point (finished both halves of blocks 1-4, haven't yet attempted 1+ through 4+ or 5), and I'm absolutely going to keep going, but a few very quick, very minor notes:

And I think that's it.  Looking forward to coming back for the second half.

I tried to fix everything you mentioned plus a little more.

The comments like this encourage people to continue with their gamedev hobbies. I may borrow this wisdom and go playing and commenting others game to make this vibe flow. :)

Finished the game, and definitely enjoyed it to the end.  Didn't even mind it calling me a nerd for doing the + levels. :-)  There might have been a few more "well, it's one of these two options, I'll just try them both" decision points, but, hey, there's more than one way to solve a puzzle!

Please add more easy levels in the future! I really liked it, but I'm not smart enough to decipher the complicated ones.

Hello. I’m sorry for the inconveniences.

I added the “How to play” on the game page. Let me know if it makes anything more understandable.

It does, thank you. I quite like the style of this game as it is quite unique, I was just having some trouble on how to go forward. 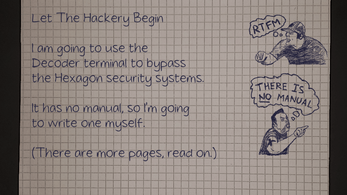 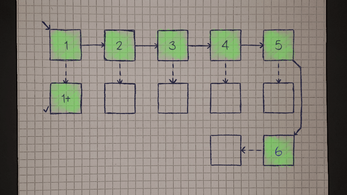 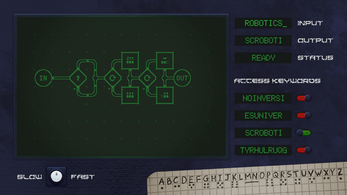 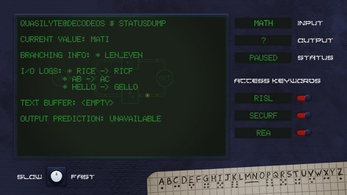 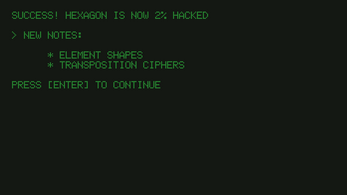